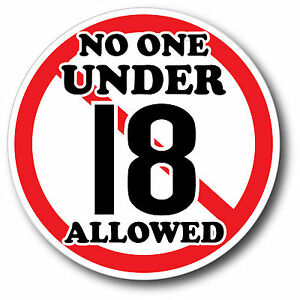 You must be at least eighteen years old to view this content. Are you over eighteen and willing to see adult content?

By law, vaporisers, electronic cigarettes and relevant paraphernalia cannot be bought by people under the age of 18. A valid form of ID and a signature will be required upon delivery of these product.

continue no thank you

If you’re a seasoned cannabis connoisseur, you’ve probably come across the word “cannabinoid” before, but maybe you’re not so sure what cannabinoids are or what they do. We recently gave you a taste of how terpenes can impact your dabbing experience, whether you’re hitting your Boost EVO smart rig or Stella vape pen. Now, we want to expand your weed vocabulary to help you understand what cannabinoids are and why they matter in your dab sesh and everyday life. 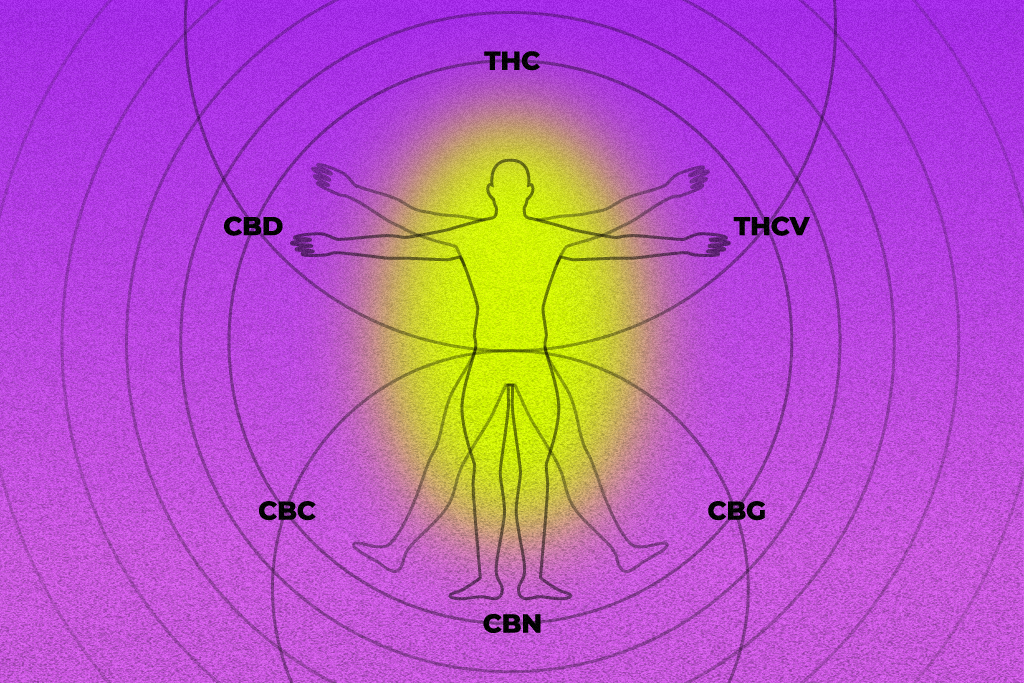 What You Need to Know About Different Cannabinoids

Cannabis produces phytocannabinoids, and the plant is thought to have over 100 of them. Moreover, mounting evidence suggests that cannabinoids work together to influence your ECS and even further — your high.

Delta-9 THCa and CBDa cannabinoids have the highest concentrations present in the cannabis plant. Known as precursors, THCa or CBDa are what cannabinoids look like before cannabis is activated. Many cannabinoids, including THCa, only activate at high temperatures. For our purposes, cannabinoids activate when cannabis flower or wax concentrate is vaporized in your electric dab rig or dab pen. Once activated, cannabinoids are converted into the recognizable counterparts that we all know and love, like THC and CBD. THC has quite the relationship with our body’s endocannabinoid system and binds to our CB1 receptors directly. However, CBD’s relationship is more indirect because it does not bind to either of the receptors, it simply influences them.

Cannabinoids interact directly with each other as well as other compounds like terpenes and flavonoids altering the effects you’ll feel from each puff of your concentrate vaporizer. We’ve explored this more in detail in our blog post here, but essentially, the combination of what’s available within the cannabis plant’s chemical makeup creates the effects you experience. This is one of the primary reasons that our smart dab rigs allow you to dial in your dab at low temperatures. Much like terpenes, when cannabinoids are heated, they are released into the vapor, creating a range of distinct effects. This reaction occurs due to a theoretical concept known as the entourage effect, which explains how each cannabinoid truly plays a role in dictating your experience. 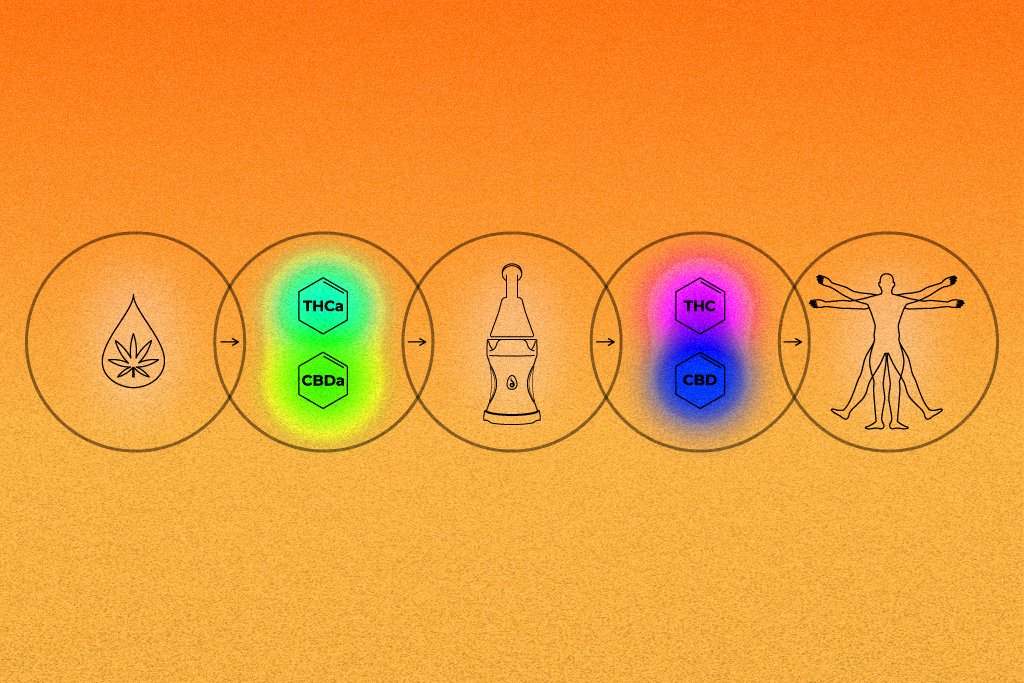 What You Need to Know About Different Cannabinoids

Let’s get familiar with the most prominent cannabinoids in cannabis, shall we? (You might even recognize a few of them.)

Starting off the list is the queen bee of cannabinoids, Delta 9 tetrahydrocannabinol, commonly referred to as THC. This beauty is thought to lend a hand in increased euphoria, inner peace, and paranoia. Some believe that Delta 9 THC can help mitigate pain, trigger laughter, cause red eyes and dry mouth, and drowsiness. In any case, abundant research is being done to see how THC could benefit various medical conditions such as PTSD, glaucoma, cancer, and Alzheimer’s. Delta 9 THC is psychoactive and intoxicating to those who consume it. 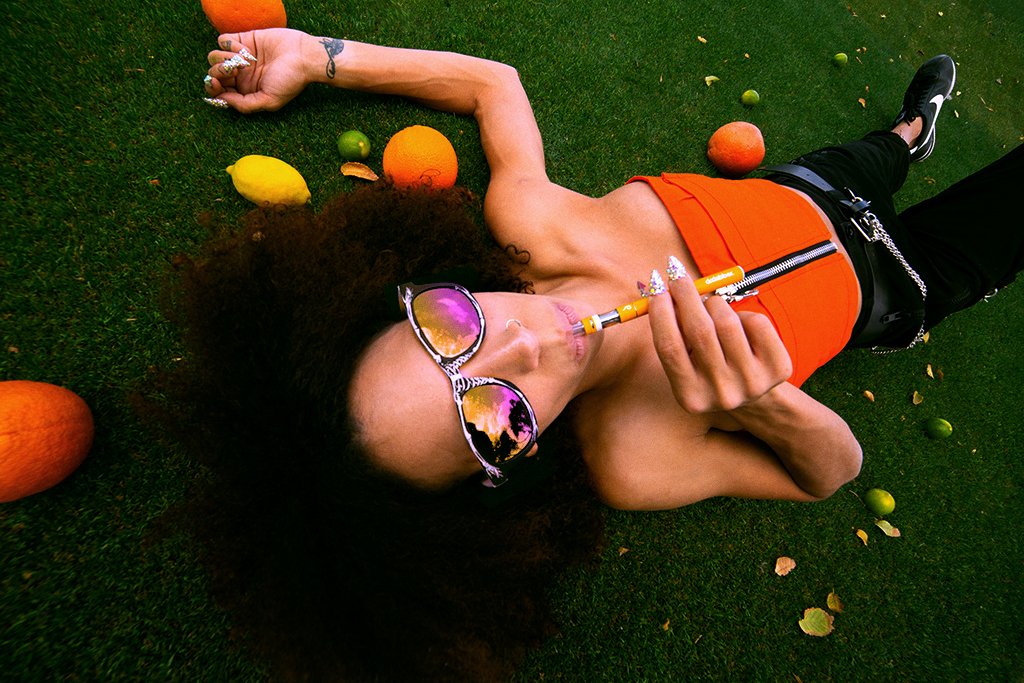 Cannabidiol, or CBD, is the second most prevalent cannabinoid in cannabis. Unlike THC, CBD is non-intoxicating and presents no psychoactive effects, however it can still make a great addition to your dab sesh. CBD is presently being researched for its anecdotal relaxing effects. In fact, researchers are uncovering evidence that CBD could help mitigate symptoms of epilepsy, anxiety, PTSD, and reduce chronic pain. As the second highest concentration cannabinoid, CBD makes up about 5-20% of the cannabinoid profile in flower and concentrates. After your dab sesh, get the full CBD experience with our CBD pen.

Over the past year, Delta 8 THC has been a rising star in the world of cannabinoids. Unlike Delta 9, Delta 8 THC binds with both CB1 and CB2 receptors, stirring interest amongst researchers for potentially heightened benefits. When you hit your SWITCH e rig, you might notice that Delta 8 is less intoxicating than its counterpart Delta 9; however, you will most likely experience effects like increased euphoria, but at a lower intensity.

On the up and up is Delta 10 THC. Users have noted that Delta 10 creates a mild high and takes the edge off, providing for a relaxing dab sesh. However, some liken Delta 10 to a sativa, causing a boost in energy and creativity.

Another up and coming cannabinoid, cannabigerol (CBG) is a fairly low concentration cannabinoid. Essentially, CBG is the precursor to all other cannabinoids, and as such, plays a huge role influencing the entourage effect. Though non-psychoactive, CBG could influence your smart rig sesh via increased euphoria. Researchers are also taking a look at how higher concentration CBG could help with treatment of cancer and insomnia.

Otherwise known as CBC, cannabichromene is another of the most prominent cannabinoids in the cannabis plant. This non-intoxicating cannabinoid is speculated to play a role in blocking pain receptors, which could lead the way to a relaxed and comfortable dab sesh, and it’s also currently being studied to help treat cancer.

Last but not least on our list is cannabinol (CBN). CBN potentially exhibits antibacterial properties, meaning it could play a role in fighting bacteria. It also demonstrates potential in easing of neurological conditions like ALS, as well as glaucoma and pain, though more research is needed. Interestingly, CBN becomes more prominent the older cannabis becomes. This is because CBN is created from THC breakdown. It should be no surprise that CBN is thought to promote euphoric properties. Though this cannabinoid is mildly psychoactive, it’s non-intoxicating so you won’t be experiencing any extra high.

We hope this could give you a better understanding of cannabinoids and their potential benefits. Now, take what you’ve learned, and bring it to your next e rig sesh.